More than 50 ex-muslims, freethinkers and intellectuals from 30 countries came together at Celebrating Dissent 2022 to champion freethought through talks, poetry, film, music and comedy. The two-day festival culminated in a protest march in the city of Köln.

“Last week, Salman Rushdie, a titan of free speech, was cowardly assaulted by a religious fanatic in New York. The barbaric attack perfectly captures the dichotomy and contrast between us and the religious fascists who carry out such atrocities:

We are the future, and they are the past.” 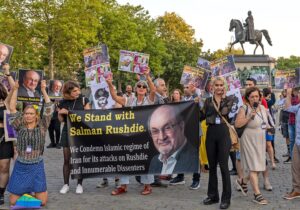 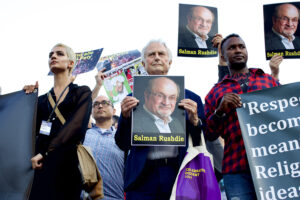 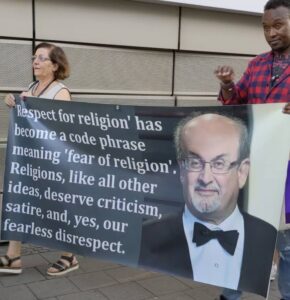 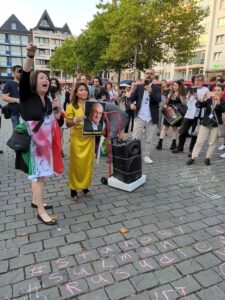 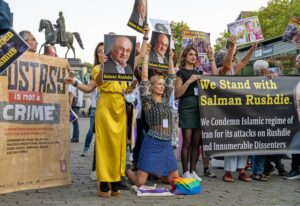 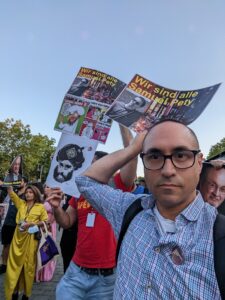 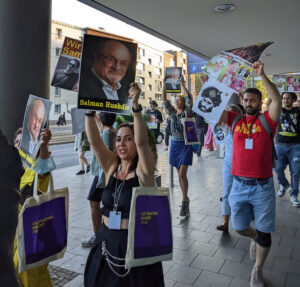 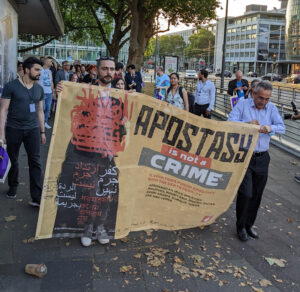 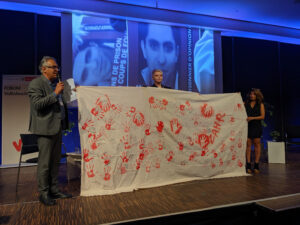 I feel the friendly and excited mood already when entering the building for registration. Participants come from around the world. Some know each other from the previous occasion in Amsterdam 2019, many have met on-line, and some now meet in real life for the first time.

A motley gang of ex-muslims, feminists, artists and freethinkers find common ground, not in conformity of opinion, but in the shared experience of dissenting, being outcast, hunted, stateless, surviving. This is their new family. Most have defected from islam, but there are also Polish atheists, a couple of humanists, a pastafarian, former evangelical priest Dan Barker, a journalist from Charlie Hebdo, and many others.

It is a safe space for people, but not safe for ideas. The value of dissent is stressed by the keynote speakers: here, different opinions are encouraged to clash in civilised debate.

Richard Dawkins strolls in and takes plenty of time during both days to sit down with everyone who wishes to take a photo and share a few words. In the West, Dawkins’s influence is big, but here, for two generations of ex-muslims, he’s almost a legend. Everyone has read “The God Delusion” back when they were teenagers, questioning the religion they were born into. Over 13 million copies of unofficial Arabic translations of the book have been downloaded, something that Dawkins has openly encouraged. In this company he’s more than a celebrity; some view him as a liberator, even a life-saver. In his award acceptance speech, Dawkins is humble: “All I do is write books about science, which is easy because the evidence is there. You, as activists, are the ones that make the real sacrifices.”

The panel discussions with famous atheists, organisations and experts are a bit uneven but bring forth many strong points. They are designed to attack the hard questions head-on:

In the first panel on free speech, many are “maximalists” with first-hand experience of enduring real censorship, physical intimidation and being erased on the net. When the panel moderator (from the USA) mentions that she feels relieved that Trump is no longer allowed to spread his systematic lies on social media, she is challenged by the panel: what about the Taliban and various dictators who are still allowed to spread their violent propaganda? This is hypocrisy.

A similar point made: If people want to ban hate speech, then start by banning religious books.

I am especially touched by the discussion on trauma and survival. The panel, including a psychologist, offers a bundle of practical tips. Many have learnt the hard way: if you’re young and want to take the risk of opposing islam, make sure you have a Plan B in case the family throws you out – have your own income, friends to trust with a sofa to sleep on, and a support group on the net. It almost sounds like a standard procedure, tried and tested. With that part swiftly concluded, the discussion switches to a harder part of trauma: how to deal with your family to keep some kind of relationship, or repair relations over time. The insights are mature: help yourself by recognising that your family will need time; they can’t help that they have been coerced into an inhumane system that makes them reject their own children. A 55 year old man in the audience gets advice from a much younger panelist on how he can thaw the relation with his brother after decades of silence.

The wonderful documentary No longer without you shows how Turkish-Dutch woman Nazmiye Oral manages to open up the relationship with her traditional mother and family.

Several speakers note the similarity between “coming out” as a non-hetero and as a non-believer: “As a teenager I realised I have to get away from the tradition, not just to survive, but to live a life!”

The panel on identity politics gets stuck, wallowing in the feeling of having been betrayed by the Left. It’s a tired chant, and I wish they would let it go and recognise that the dividing line is not an over-simplified political view of Left versus Right, but more obviously between those who defend human rights and those who do not. Zara Kay rips off the band-aid with a more liberal view, throwing a punch at well-meaning western feminists who criticise her for being unnecessarily provocative: “My very existence is blasphemous. You care more about people’s hurt feelings and your branding than about my life and women’s real suffering? Stop talking about cultural differences. I want the same liberation and the same human rights as you.”

A strategy was proposed by Milad Resaeimanesh, leader of the Committee of Ex-Muslims Scandinavia: normalising apostasy (i.e. leaving religion). By sharing our own experiences on the internet, we show closeted atheists around the world that they are not alone, and that apostasy is a growing phenomenon.

Overall, the atmosphere is optimistic and forward-looking, though many sores are wide open. Bangladeshi writer and publisher Ahmedur Rashid Chowdhury describes how he survived a murder attempt, while a colleague was hacked to death.

Special guest Ensaf Haidar gives an update on her husband Raif Badawi, who, for the crime of blogging, was sentenced by a Saudi court to ten years in prison, a thousand lashes, and a huge fine. After having served the time he is now out of jail, but has to endure an additional ten year travel ban. His youngest daughter will be 28 when they can meet again. #FreeRaif #LetRaifFly

Performance artist Victoria Gugenheim organised street art both days. A large white sheet with red hand prints for Raif Badawi, wrapped and given to his wife Ensaf Haidar. And another manifestation where all raise their hands with a red “A” for apostate (or atheist). Simple and powerful. FEMEN artist and activist Jenny Wenhammar led a workshop on creativity in challenging fundamentalism.

Iranian atheist Soheil Arabi, who was on death row for blasphemy, receives the Freethought Champions Award. From internal exile, we hear his recorded message: “I have no regrets that I have been in prison for eight years despite the fact that I have lost my health, because I think we have paved the way collectively together for liberation. I am a drop in this sea and glad to be part of the society of enlightenment.” He added, “When one is not free, then you cannot have a normal and meaningful life, you cannot choose; women cannot choose their dress, men cannot even decide on the shape of their beard. We were dead already; we are trying to be alive again.”

For the climax, a big protest march through the streets of Köln. Almost everyone participated with banners and plaques in support of Salman Rushdie, Samuel Paty, Raif Badawi, Charlie Hebdo. Possibly a world record in the number of ex-muslims gathering, and the number of blasphemous Mohammed caricatures waving in the air.

It was an adrenaline rush. Loud, fiery, uncompromising.

The day after, a discussion on fear. Most are afraid, of course. Some feel they have nothing more to lose. Others feel it’s just a moral duty to take the fight.

Many continue to live under constant threat. The least the rest of us can do is to show our solidarity with the uncountable atheists that have been imprisoned, tortured, murdered, and driven into exile – in the name of religion.

“You can cut all the flowers but you can’t keep spring from coming” – Nobel Prize winner Pablo Neruda, quoted in the keynote speech.